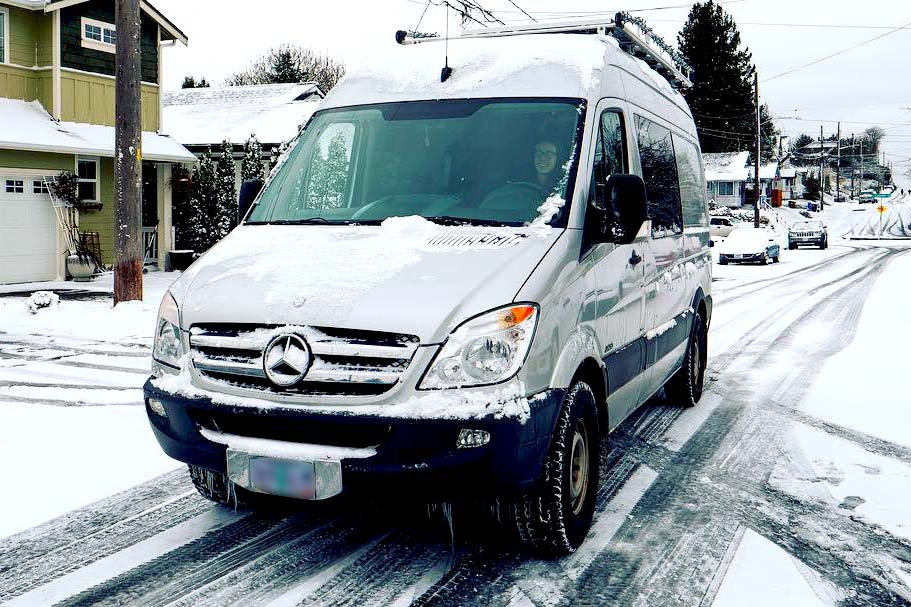 In December of 2016, I made a video called “Winter Sprinter” in which I discussed some practical tips for improving how two-wheel drive vehicles, specifically Sprinter vans, perform on snow and ice. The gist of that video is this: while 4x4s are nice to have, they’re not essential for winter driving. A good set of snow tires and a few hundred pounds of weight (placed directly over the driving wheels of your car, truck or van) will massively boost your vehicle’s ability to maintain traction on icy roads. This, in turn, will keep you happy, mobile, and safe.

In this blog post, I want to expand on the topic of winter driving and discuss my favorite snow tires in depth. The tires I’ll be focusing on are Bridgestone Blizzak. These puppies are totally incredible at gripping slippery surfaces. They’ve kept me safe for three consecutive winters and have allowed me to continue traveling in my rear-wheel drive van problem-free for work and pleasure. Having Blizzaks on my rig has also significantly reduced the amount of anxiety I feel about driving on frozen roads, which has been a very welcome change in my life. If you’re somebody who’s looking to improve how well your car drives on snow and ice, keep reading, because this is exactly what I’ll be talking about here.

First, a little backstory… I grew up in a mountain town and have been snowboarding my entire life. This means that I’ve had to learn to get myself to and from ski areas since the age of 16. Since obtaining my first drivers license, I’ve owned at least a dozen cars, including two-wheel drive (2WD), all-wheel drive (AWD), and four-wheel drive vehicles (4WD). During my driving career, I’ve had plenty of time to experiment with different types of snow tires and have concluded that Bridgestone Blizzaks are hands down the best.

I don’t know exactly how Bridgestone created such a good winter tire, but I can personally attest to their quality. The difference between driving my Sprinter van with Blizzaks vs. without them is night and day.

So what makes snow tires so effective for winter driving? Let’s break it down frame by frame.

A good snow tire has a few key features:

1. Snow tires are made from much softer rubber than all season-tires. This soft material makes winter tires sticky and gives them much better grip on wet, icy, snowy, and slippery surfaces.

Side note here: The term “all-season” is kind of deceiving. All-season tires are made from harder rubber, which enables them to have longer lifespans on dry roads. Unfortunately, when temperatures drop below freezing, all-season tires become even harder, thus resulting in diminished grip on slippery surfaces. In my opinion, all-season tires should really be called: “three-season tires” or “summer tires” to avoid confusion.

2. Snow tires have deeper more distinguished tread patterns. These deep treads accomplish at least two things: a) they allow tires to grab onto snow and ice even more effectively and b) they help remove excess water and icy muck, which would otherwise inhibit traction.

3. Winter tires are also siped. This just means that they have thousands of tiny cuts incorporated into their tread. These cuts act like little suction cups when they come in contact with the road.

It’s also worth noting that some winter tires come with metal studs embedded into their tread. Such tires are called “studded tires.” The Blizzaks I’m talking about do not have studs and are thus called “studless tires.” There are differing opinions about whether or not studs improve or diminish a vehicle’s performance on wintery roads. I don’t want to get into this debate here, but I will say this: I used to be in the studded camp, but after my first season on studless Blizzaks, I see no reason or benefit to go back to studs. Studs generate extra road noise and have a tendency to shoot off and damage your car, as well as other cars on the road. Since Blizzaks provide an equal amount of road grip on icy/snowy roads without the use of studs, I see no reason to run studs when I don’t have to.

Three years ago, a Costco tire specialist convinced me to install Blizzak W965 tires on my Sprinter van. Post installation, I quickly discovered how life-changing these tires are. I was instantly able to confidently and safely drive on snowy and icy roads. My winter tires enabled me to dramatically decrease stopping distance when road conditions are hazardous. I am now able to drive up and down various hills without slipping. Finally, I can break at a stop sign at the top of a hill and then accelerate from a dead stop without spinning my wheels (watch video above to see examples of what I’m talking about).

The New And Improved Blizzak

Bridgestone has since revamped and improved their snow tire line for light trucks and commercial vans. In early 2018, they released the Blizzak LT and this is the exact model that I’m currently rocking on my van in 2019. The Blizzak LT features a new rubber compound that promises extended wear life. This means your tires should last an extra season or two and help you save some hard-earned cash. The LT model also contains a new tread pattern with 30% more biting edges. These biting edges help to further enhance traction on snow and ice.

So far, I’m very pleased with the new model and find that they hold the road incredibly well. That being said, the Blizzak LT’s are still a relatively new tire for me so I’m going to keep testing them and perhaps do an update at a later point.

Good snow tires can drastically improve how your vehicle performs on snow and ice. Whether you’re driving a 2WD, AWD, or 4WD vehicle, it’s a good idea to maximize tire traction when road conditions are bad. In my extensive trials, I’ve found that Bridgestone Blizzaks are the Ferrari of winter tires and I highly recommend putting them on your truck or van.

If you decide to follow my lead, Blizzak tires are available at most major tire retailers. I picked mine up at Costco. You can also get a set online at: www.BridgestoneTire.com. Additionally, it’s worth mentioning that Blizzaks come in a wide range of sizes so you shouldn’t have any issues finding tires to fit your car, truck, or van.

Van Curtains are Essential for Privacy, Climate and Life

How to Stay Healthy Between Thanksgiving & Christmas