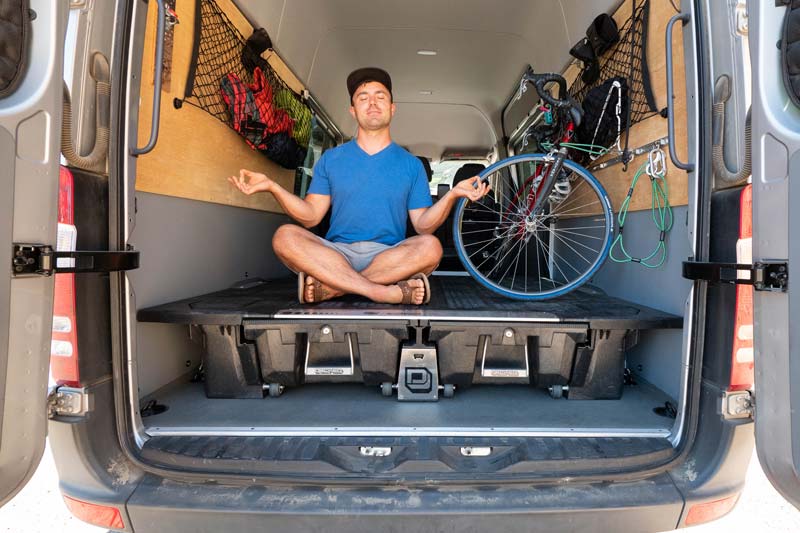 Sprinter van life has it’s own set of challenges. Until recently, I was completely clueless about how to manage / secure free-floating van junk (i.e. camping gear, surfboard straps, drones, cameras, computers, tripods, and the like). On top of being annoying, having gear rolling around a cavernous vehicle isn’t safe for driver or passenger. According to Newton’s Second Law of Motion, slamming on your brakes while driving 60 miles per hour on the freeway, multiples the weight of a flying object by roughly 550 times. This means that a two-pound camera tripod can quickly turn into a 1,100-pound torpedo if not properly stowed in a moving van.

While trying to figure out how best to manage free-floating gear, I discovered Decked, a USA-based company that manufactures sliding drawers systems for trucks and cargo vans. I reached out to the company and suggested we collaborate on a YouTube video. They said: “YES!”

After receiving the pullout drawer system, I installed it into my van and vigorously used it for a month. I filmed everything to give others a better sense how the Decked storage system works. Want to see what I learned? Watch my video review below.

SPOILER ALERT: I totally dig Decked storage! This system has drastically improved the quality of travel for me. In fact, I like these drawers so much, I’ve decided to redesign my entire van setup around the drawers (new van build video coming soon).

Decked also makes accessories to help you get more organized. I have a video about that too.

The History of Aluminess